Reflecting on 50 years in business in Gloucestershire: Meet the managing director of Evans Jones

As Evans Jones celebrates 50 years in business in Gloucestershire, its managing director, David Jones, looks back over half a century – and the county’s incredible ability to adapt, change and grow.

Focusing on the major factors which have created that change, from the economy to Government policy, his view is very definite – that Gloucestershire is a county with a reassuring ability to reinvent itself.

About the expert – David Jones, managing director and head of planning services at Evans Jones

David Jones is the managing director and head of planning services at Gloucestershire-headquartered Evans Jones. He is a chartered town planner with more than 25 years of experience dealing with a wide range of planning and conservation issues.

As a practice, Evans Jones is committed to sustainable development and building solutions, carrying out work on a diverse range of projects both in Gloucestershire and on a national scale.

If there’s been one thing that’s characterised Gloucestershire over the last 50 years, what would you say it is?

There has been so much change in the county in the last 50 years. There has always been change, but that has accelerated in the last few years especially – probably a result of the digital age which we are now in.

Digital allows us to do so many things more quickly, and perhaps Covid has accelerated our sense of that and forced us to embrace it – for good or ill.

In terms of the impact of the pandemic, we are still at a tipping point as to where this leaves us. It will be interesting to see if people have short memories of what we were like pre-pandemic – and we just move on – or whether we will move back to how things were.

We have embraced flexible working, for example, but I have heard anecdotally that some businesspeople are becoming frustrated with the ongoing culture of working from home. For others, it works well.

All these things affect people, and they affect the built environment in which Evans Jones is particularly interested.

How far back does your working life go – and what are the standout differences in the built world from then to now?

I started work in Gloucester in 1984, just as the age of computerisation started. I have lived and worked through that whole dynamic – the advent of the internet and all that continues to come with that.

But, I think in terms of the built world, in very general terms, perhaps the biggest shift was that we spent years and years moving people out of town centres. As a nation we decided they were not suitable places and that housing estates on the periphery of towns were the thing.

That is still ongoing, although I think we are now seeing a realisation from our town planners that we need vibrant town centres, too, in order for them to not just survive, but flourish. So we are seeing the merits now of looking again at city and town centres with different eyes.

There is so much positive change underway in Gloucester currently – The Forum, The Quays, The Docks, King’s Square – at a time of economic uncertainty, too. How did we end up where we are? 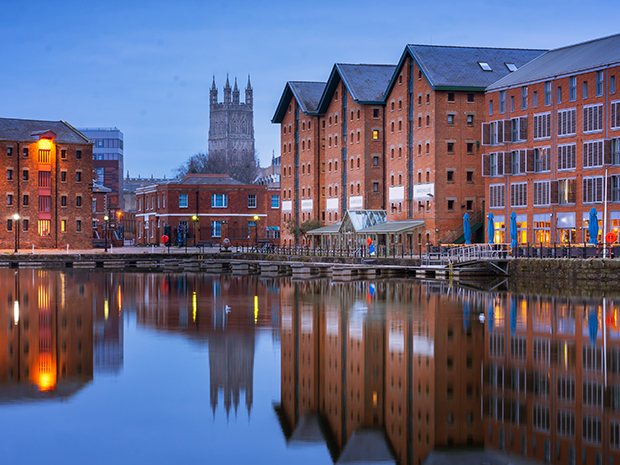 We are definitely seeing a resurgence and rebirth. I did not just work in Gloucester when I started, I was born there as well. I have lived there since 1963 and in those early years it was pretty active, a thriving place and the town centre was pretty good.

All that 1960s architecture was new then. If you look at it through the telescope of today, it is easy to say ‘God, that was awful – why did Gloucester tear down those beautiful buildings?’ But, I think we sometimes forget about the decline of the 10 years before and the impact that had on the some of those already old buildings.

It is easy to look back at that period of early working life and think ‘Gloucester had it all for a while’.

But these things are often cyclical. The Gloucester of then was also reliant on and invested in industry and when Thatcher’s Government decided perhaps manufacturing was not what the UK wanted to invest in, Gloucester was one of those places that lost out.

Perhaps that is when it started to go into a downhill spiral, and all of that helped contribute to the decline of its town centre.

How significant has Government policy and decision making been for Gloucester?

We saw council houses built, and then during the 1980s sold off. From a social perspective there was a great emphasis on people owning their own homes, but we forgot to build a range of houses at different price points.

It took another generation for us to accept we also needed to build what became known as affordable housing as well – and to encourage developers to do so.

It was not just housing policies and living outside town centres that affected their fortunes. We also began a drive to build out of town retail centres, which were very successful, but also had their impact on the town and city centres.

In recent years we have seen a big shift by successive Governments to try to close the stable door on this and to use planning to try to bring people back into the centre of towns and cities and make them acceptable places to both live and work again. 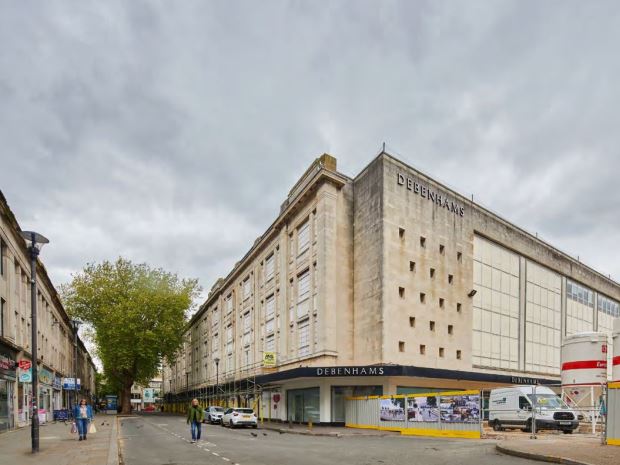 Outside of Government, what other factors have shaped the county?

We have also witnessed a number of periods of boom and bust. My father set up the business in 1972 – and I recall the oil crisis, the three-day working week, the coal strikes and not having electricity for periods. Something which would be impossible for today’s digital economy to deal with.

We had the recessions of the late 1980s and the spiraling interest rates and more recent downturns like the financial crisis.

All of this also affected Cheltenham, of course. We may look at it now and think of those lovely big houses and those great buildings we know today, around Pittville and the like, but some of those were not properly finished when they were first built because of economic fortunes taking a turn for the worst.

Economic trends and decisions by business also play significant roles. There are a lot of examples where decisions made by big business have caused change – which were devastating, but which the county has turned into opportunity.

For example, in Cheltenham we saw Chelsea, Kraft, Marlbrough Stirling, Gulf Oil, Zurich, Eagle Star – major employers – all move out or decant back to London.

And then we have had the motorcar too. Ten years ago we had commercial agents say ‘we are not going to move to an office without car parking’.

It was a sign of how reliant we have become on the car, with no significant investment in new transport systems since then. We created a nation obsessed with the motorcar and the need to park was paramount.

But today, that is changing again. The new Hub 8 Minster building in the centre of Cheltenham has no substantial car parking – in fact it is built on a car park.

Is it a sign our relationship with the motorcar is on the wane? Will the fuel crisis accelerate that change?
If people begin to feel they do not need to rely on the private car so much that will transform city and town centres and make us move towards different design solutions.

We have a long way to go on that one. 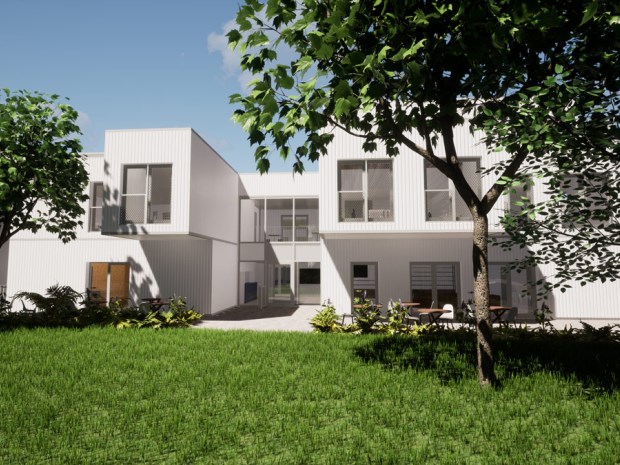 How important is sustainability in the built environment?

In the last 24 months we have seen sustainability become a primary concern, particularly for commercial occupiers.

Historically, it did not make much of a difference to value, sale or rent. But I think we are now seeing green pressures come to bare and impact on everything from construction through to how efficient buildings are to run.

Saying all that, 99 per cent of our buildings are ones we are stuck with already ¬– which is a double-edged sword; while we now recognize how those old buildings enhance town and city centres, can you make those sustainable and efficient?

What strikes you about the county currently?

Lots of the major factors we mention are still at play today. Today it is Government investment coming into Gloucester which is helping drive the city in the form of Levelling-up funding for the University of Gloucestershire’s plans for Debenhams, The Forum Digital and transformation of King’s Square and The Fleece Hotel project on Westgate Street.

That is public money influencing what is happening. Often, unfortunately, a city has to hit rock bottom before it gets that funding.

That is all building on regeneration that has been building in Gloucester for a while now, most notably with the Docks and Quays.

But I think Gloucester has a really bright future.

And Cheltenham has a really bright future, too.

If you look at the Golden Valley Development and the emphasis on cyber and the sustaining presence of GCHQ, Cheltenham and Gloucestershire are in a good place with some fantastic people.

All of these projects, like The Forum Digital – they might be led by the public sector, but they all build confidence in the private sector and momentum.

Cheltenham is recovering well post pandemic. It did well to get John Lewis pre-pandemic, I believe the town’s footfall is back past pre-pandemic levels and we are seeing vacant shops filled on the high street too. 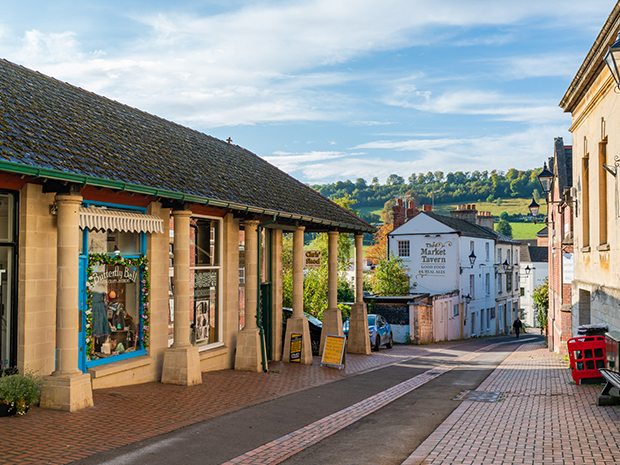 Stroud, historically, has always been a bit of an outlier – perhaps seen as a little bit hippy. But it is interesting that a lot of the views associated with the town – wind turbines, green energy and the environmental issues – are now mainstream.

I think that endorsement of its sense of self has given the place an energy and I think that shift is great for Stroud, really positive.

And the town has seen some major investment too – like the Five Valleys shopping centre, which has also embraced the concept of ‘local’ with some of the businesses it has partnered with.

Stroud has a fantastically vibrant farmers market too, of course – probably one of the best in the country – and is also on a wave.