David Walliams reveals what fans can expect when the live production of his popular book, Billionaire Boy, comes to Cheltenham Racecourse in April 2021.

As well as being a judge on Britain’s Got Talent and a comedian, David Walliams is now an award-winning children’s author and is bringing his book Billionaire Boy to life at Cheltenham Racecourse.

Walliams has teamed up with Birmingham Stage Company and Coalition Agency to bring his popular book Billionaire Boy to life in a Covid-safe, Car Park Party production which will tour 15 venues across the UK with the final performances taking place at Cheltenham Racecourse on Sunday 18 April 2021 at 2pm and 5pm. And here’s what fans can expect…

What is it like seeing your books come to life?

It’s the most brilliant thing, seeing a book that you’ve written come to life either on television or on stage.

You feel like a magician because what was in your head is somehow now all real, right in front of you, so it is a very very exciting thing.

If you were given one billion pounds to spend however you liked and you had to spend it today, what would you spend it on?

There’s one thing that Joe Spud, who is the Billionaire Boy, has in the book which is a water slide going down from his bedroom to a swimming pool.

He just gets out of bed and goes straight down a water slide. That is something I don’t have and it really pains me.

So if I had a billion pounds to spend today, I’d get that water slide because water slides are so much fun. I love them!

Apart from Joe Spud, who is your favourite character in Billionaire Boy?

My favourite character in the story of Billionaire Boy is Mrs Trafe the dinner lady and I actually played her in the TV adaption.

Basically, in the story she asks Joe for money and she says she needs it for a hip operation but spends it on plastic surgery. So it was a lot of fun creating her horrible school dinners and also a lot of fun giving her the surgery in the book and seeing what she does with the money. It highlights the fact that Joe’s in a pretty difficult predicament because everyone is asking him for money and they all have good reasons why they need it.

But at the same time, money is quite a corrupting thing and it makes people do bad things and lie to him. So Mrs Trafe is really a side character, but she does something pretty important in the story. 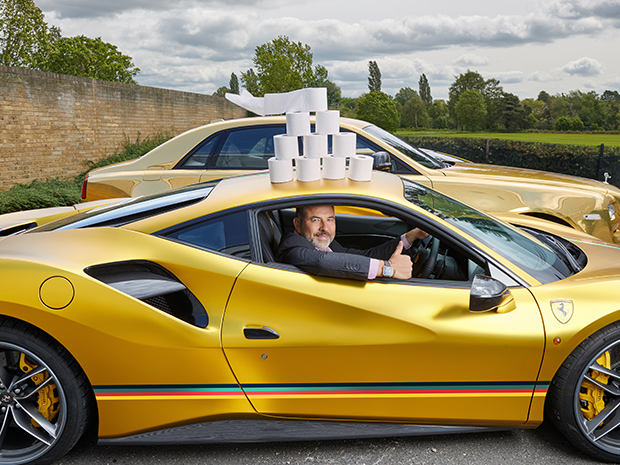 If BUM FRESH was a real toilet paper, would you use it?

The reason Joe is a billionaire is because his father, Len Spud, who was just a humble man who worked in a factory, came up with this brilliant idea of a creating a special toilet roll which is moist on one side and dry on the other.

I think this is a fantastic invention and I cannot believe someone hasn’t come to me and given me a billion pounds for the idea because if it was produced, I think it would really catch on. But I liked it being something like this which they made their money from, because actually when you sometimes meet people who have lots and lots of money you find it’s really bizarre things that they do.

I met someone who was really rich and it was because their father provides toilet rolls to lots of pubs in the North of England and I thought, I could do that, but I didn’t have the idea, did I?

Tell us more about the producers of the show.

The Birmingham Stage Company has already done two incredible adaptations of my books, Gangsta Granny and Awful Auntie, both of which went round the country quite a few times, came into London, got great reviews, audiences loved the shows and came back and back and back – and so I’m really excited that a third book of mine is in their hands.

I think this could be the most fun show of all because in a way this is the most comic book. It’s a story with an emphasis on jokes and silly situations and obviously the whole thing is quite surreal with someone having so much money. So I think it’s going to be a really fun theatre show, and I can’t wait to see it


With the original theatre production of Billionaire Boy having to be cut short due to the pandemic, how does it feel to see Birmingham Stage Company reimagine the show for Drive-In Theatre?

It’s brilliant! It’s very imaginative. I think people are craving some entertainment and especially live entertainment because although the TV has still been on, you haven’t been able to be part of an audience.

So, I think it’s a great and safe way to enjoy a show and anyone with kids at home all day, homeschooling, you know, you really want something you can take your children to do or see. Hopefully this will really entertain families.

David Walliams’ Billionaire Boy is at Cheltenham Racecourse on Sunday 18 April 2021 at 2pm and 5pm.

1.
Hot air balloon race to launch from Gloucestershire Airport
2.
12 new Cheltenham openings to explore in 2023
3.
18 Gloucestershire businesses boosted by Start and Grow Enterprise
4.
9 of the best places to see snowdrops in Gloucestershire
5.
23 exciting things to look forward to in Cheltenham in 2023