‘You are not alone’: Meet the Gloucester couple who have been fostering teenagers for more than five years

Almost half of children that come into foster care are teenagers, so one couple from Gloucester reveals what to expect when fostering teens and how rewarding the experience can be.

When people think about foster care there is often an assumption that it’s only young children who need fostering. However almost half of all children who come into foster care are aged over 11.

Teenagers need foster carers too, but people are often daunted by the idea of looking after them – SoGlos spoke to a couple from Gloucester who opened up about what it’s really like to foster teenagers and why it’s such a rewarding experience.

Tell us a bit about yourselves. 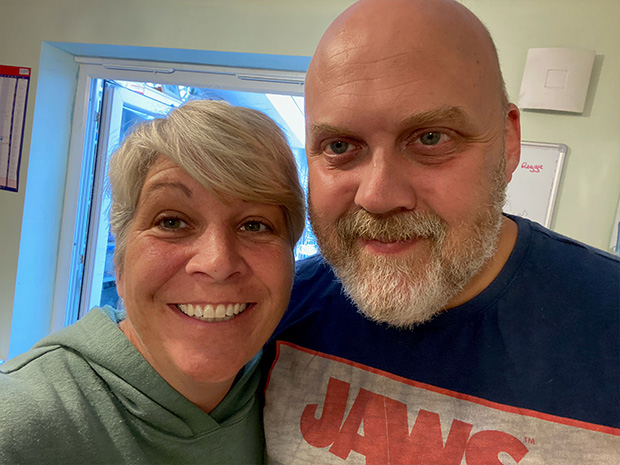 We’re Becky and Stuart Kefford and we are both in our 40s. We live in Gloucester and have been fostering teenagers for Gloucestershire County Council since 2016.

What were people’s reactions when you first said you wanted to be involved in fostering teenagers?

When I said I wanted to foster teenagers most people, including my husband, thought I was crazy. We already had two of our own so what difference was an extra one, I thought?

That one turned into three and we now have five teenagers living with us. I was then convinced, since I was at home more, that a dog would be a good idea. The cute photos and puppy dog eyes from the children wore me down and we ended up with three Saint Bernard dogs! Proof that you can foster with dogs, who are like therapy for all of us.

Fostering teenagers is not for the faint hearted. We have cried, been driven to despair and survived on very little sleep. They will argue, make silly mistakes, frequently choose the wrong option and challenge and push until they nearly break you. But they are teenagers — that is what they do whether they are in foster care or not.

What kind of support is on offer for those fostering teenagers?

The advantage with fostering is that you are not alone. We have an amazing fostering social worker, local support groups and loads of training. There is also usually a friendly foster carer who has been through or is going through the same challenges, who can stand by you and work with you.

What is the most rewarding thing about fostering teenagers?

Fortunately, what we gain from these young people far outweighs the struggles. One silly mistake is overshadowed by the three amazing choices they have made in the same day.

I have learnt so much and there are far more times that I smile rather than cry. The pride I feel for even the smallest achievement is what keeps me going. There is nothing more rewarding than to share their success as young adults. My family is bigger, I’m more resilient and if my house were bigger, I would have more!

Why do you think more people should consider fostering teenagers?

1.
9 of the most exciting Gloucestershire properties on the market in October 2022
2.
21 independent cafés and coffee shops in the Cotswolds
3.
14 international restaurants you have to visit in Cheltenham
4.
One of the most exclusive restaurants in the Cotswolds has re-opened
5.
43 places to host unforgettable children's birthday parties in Gloucestershire