Warm weather got you all hot and bothered? Here’s 17 of the best splash pads, outdoor pools and paddling ponds, all within an hour of Gloucestershire.

If you’re looking for somewhere to cool off from the hot weather this summer, then look no further! SoGlos has rounded up the best splash pads, paddling pools and outdoor lidos in Gloucestershire and beyond.

While some of our suggestions are beyond the border, we’ve tried to ensure most are within an hour’s drive of Gloucestershire, with many of the activities costing just the price of parking.

So, pack up a picnic, throw in some towels and don’t forget the sun cream as we help you plan the perfect summer’s day out.

Cheltenham’s only indoor aquatic play zone is based at Leisure at Cheltenham. Featuring a mini slide, lots of sprayers, and a warm shallow pool perfect for splashing in, a trip to this splash park is great fun for children under five, but up to eight-year-olds can also enjoy the fun.

For older kids, inflatable fun sessions take place in the main pool every Sunday and during school holidays.

A post shared by Leanne Elizabeth Photography (@leanneelizabethphotography) on Aug 7, 2017 at 3:36pm PDT

Included in the admission of a day out at Slimbridge WWT, Welly Boot Land is a play area that’s perfect for both rainy and sunny weather. Giving kids the chance to jump in puddles to their hearts’ content, the area is made up of turrets, rivers and rocks surrounded by water.

As well as Welly Boot Land, there’s a playground, soft play area and plenty of wildlife to keep the kids entertained. Parking is available on site, and there’s even annual passes available if you want to come back time and time again.

The beach is open from March until the end of October and features a sandy beach, a café, ice cream parlour, paddleboards for hire, boats for hire and the inflatable water assault course. 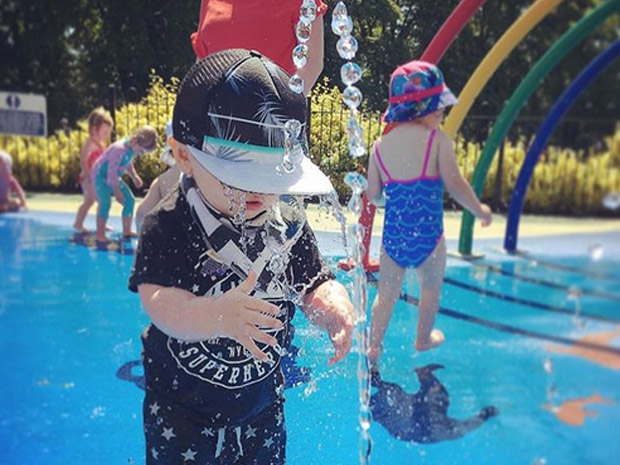 Not to be confused with Abbey Park in Pershore (below) Abbey Park in Evesham is a stunning space connected to Evesham Abbey. As well as a brilliant water play fountain, the park benefits from a large children’s play area, open spaces, lily pool, skate park, café and ice cream parlour, boat trips along the river and picnic benches.

The splash zone opens from 10am until 6pm, seven days a week until the first week after the summer holidays. There are no changing rooms on site, so visitors are encouraged to bring lots of towels to dry off.

Abbey Park in Pershore is a lovely park just beyond the border that’s been awarded Green Flag status every year since 2008. Located between 30 and 45 minutes away from Cheltenham and Gloucester respectively, the park’s facilities include a water play fountain, open grass area, children’s play area, skate park, community orchard and picnic benches.

The splash zone opens from 10am until 6pm, seven days a week until the first week after the summer holidays. There are no changing rooms on site, so visitors are encouraged to bring lots of towels to dry off.

Lido Park is home to a lovely outdoor pool space that’s perfect for smaller legs and a small water play fountain. The fountains are operated by standing on pressure pads set within the floor and can be operated by both children and adults.

The pool opens on Saturday 25 May 2019 from 10am until 6pm, seven days a week until the first week after the summer holidays. The surrounding park also benefits from a five-a-side court, basketball nets, café, children’s play area and duck feeding pond.

Sandford Parks Lido is Gloucestershire’s most popular place for an outdoor dip, with its fans including both serious swimmers and fun-loving families alike.

The Cheltenham outdoor swimming complex comes complete with a 50-metre main pool, dedicated children’s pool and paddling pool, as well as a kids’ play area and four acres to run around, not to mention a café which serves fantastic sausage sandwiches!

When the sun starts to shine, Stroud’s swimmers head to Stratford Park Leisure Centre. As well as being home to indoor facilities galore, its 50-metre outdoor pool also welcomes those wanting to take an alfresco dunk.

With reasonable admission prices and situated within the stunning surrounds of Stroud’s Stratford Park (one of Gloucestershire’s finest), pack a picnic for tucking into after a long swim and a cheap and cheerful summer day out will be complete.

First opened in 1961, the 20-metre Wotton-under-Edge Pool was originally built by teachers and pupils at a local school. Fitted with a retractable roof a number of years ago, even if the British weather is playing up, swimmers can still count on a fun day out.

One of the oldest outdoor swimming pools in the UK, Cirencester Open Air Swimming Pool was built in 1869 and continues to attract the crowds from May to September – thanks to its friendly atmosphere and balmy 27-degree natural spring water.

As well as a 28-metre main pool with a slide, there’s also a children’s paddling pool, sunbathing patio and tuck shop, not to mention the glorious Cirencester Park surroundings to take in.

Given as a gift to the ‘inhabitants of Lydney and Ashburton’ by the Bathurst family in 1920, Bathurst Swimming Pool in Lydney is considered to be one of Gloucestershire’s best kept secrets.

Spanning 41 metres, the Forest of Dean outdoor pool is run by volunteers and is open to members of the public for the summer season from May. There is a shop selling hot and cold drinks, snacks and ice creams, an area for picnics and sunbathing, as well as toilets. Plus, there is also a Serious Swimmers Club which runs from the beginning of May.

A short way over the county borders, Chipping Norton’s family-friendly lido offers not only a 25-metre pool, a toddler pool with a slide, and a cafe onsite, but it is also an eco-friendly attraction, which uses solar electricity and natural heat from the earth to keep the pool lovely and warm for swimmers.

The self-proclaimed ‘pool with a social conscience’ has been running as a local charity since 2004, and offers early morning sessions, adult-only swims, and sessions for the over 60s too.

This huge park in the centre of Kidderminster can be reached in just under an hour if you’re travelling from Gloucester or Cheltenham. The splash zone opens daily from the end of April until the end of September between 11am and 6pm.

Gheluvelt Splashpad within Gheluvelt Park in Worcestershire is a huge splash zone, just beyond the border. The splashpad operates between 11am and 4pm in May, June and September, with hours extending to 6pm from mid-June to August. The splashpad closes from October to March.

As well as the amazing splash facilities, there’s also a play area, toilets, a café, tennis courts, a bandstand and an outdoor gym.

This lovely public square near to Bristol’s waterfront area is a brilliant sun trap and a great place to spend an hour or so paddling.

With plenty of child friendly attractions, restaurants and museums nearby there’s lots of places to retreat from the heat, but Millennium Square also offers somewhere to cool off, right in the heart of Bristol.

It takes around an hour and 15 minutes to reach this waterpark from Gloucester, but with six waterslides, a water play area and numerous pools, it’s certainly worth the journey for a great place to cool off.

It’s not just the beach at Weston-Super-Mare! Water Adventure Play Park is a splash pad that’s open between April to September. Featuring pressure pads, sprinklers and water jets, there’s plenty to keep kids entertained in the sunshine. It’s just a stone’s throw from the beach, too.

Offering a wealth of educational benefits in the fresh air, SoGlos has scoured the UK to find 12 independent schools with amazing...

9 ways to do good in Gloucestershire

There are loads of things you can do to make a positive difference in Gloucestershire, with SoGlos’s rounding up just a few...

11 parent and baby activities in Gloucestershire

With many parent and baby activities now restarting, SoGlos has rounded up 11 of the most fun and safe activities for mums...

Whether you’re carving jack-o-lanterns or making pumpkin pie, SoGlos has rounded up some of the best places to pick your own...

25 spots to hunt for vintage homeware in Gloucestershire

Whether you’re an antiques collector, a retro enthusiast or love a bargain, SoGlos has scoured high and low for 25 of...

@theBarnTheatre @PvtPeacefulPlay @BristolOldVic We can’t wait to see Marry Me A Little later. See you soon!

We are so excited about the @soglos 'Virtual Awards Evening' this Thursday 22nd October at 8pm. We were delighted t… twitter.com/i/web/status/1…

7 Gloucestershire websites developed by 16i